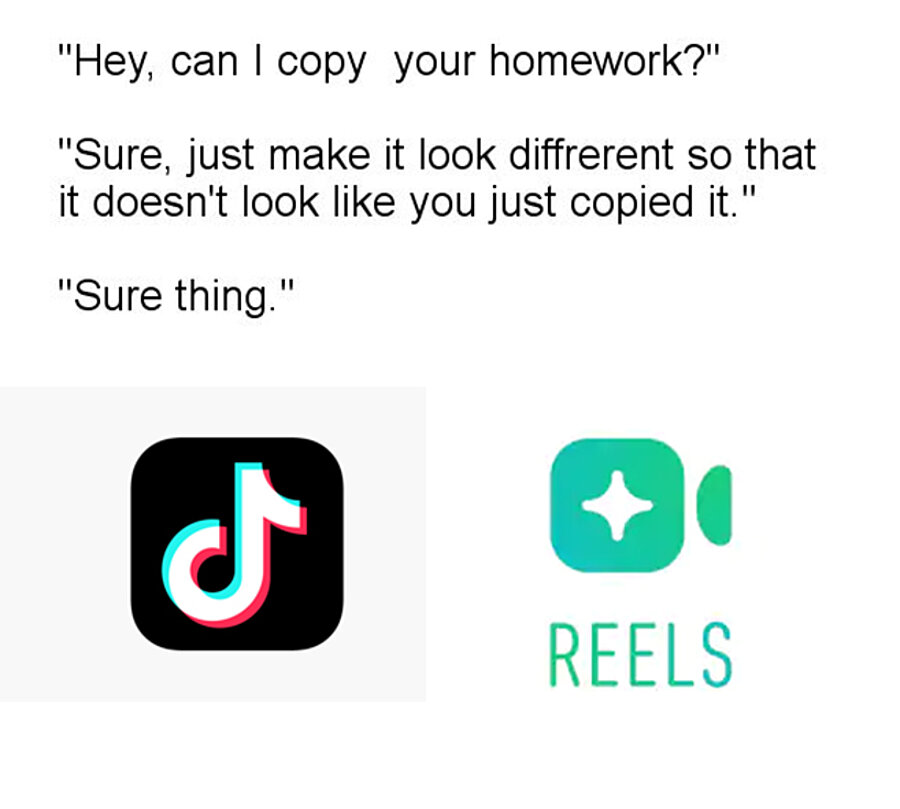 After adding the Instagram Stories to get over the competition against Snapchat, Zuckerberg launched a new tool which goal is to increase overtake the success of TikTok. The question that everybody is asking is: Will Reels be up to the level of the new Chinese network?

The same happened in the past with Snapchat. Instagram Reels copied the major successful characteristics of its competitor. Once again, they are funny video clips that last 15 seconds with the possibility to add music, text, lip sync, and karaoke. Thanks to the lockdown, when people were forced to stay at home, the TikTok videos have become part of our lives. In March 2020 the social reached 5.4 million of unique users in Italy, which is an increment of 49.7% from December 2019. Anyway, Instagram stays the second most used social media in our country with a total of 28.8 million of unique users but with only an increment of 6.5% from December 2019.

The most impressive data is the 2 billion of users who downloaded the app of TikTok from App Store and Google Play. It is not surprising if Zuckerberg and partners immediately started to work in order to contrast the rise of the Chinese giant and the runaway of young users, who preferred the new social network instead of Instagram.

According to the Wall Street Journal, the platform owned by Facebook has offered incentives to the most popular influencers on TikTok to persuade them to use the Reels during their launch in the USA and other countries. Some of the offers given to the most famous TikTokers amount hundreds of thousands of dollars. The highest offers go to the users who post their contents solely on Instagram. To the ones who would like to keep both the socials, are asking to firstly post the videos as Reels.

There only two, almost insignificant, differences between the video clips: the videos on TikTok can reach 60 seconds and the display layout positions the effects in a different way. Would Instagram be able to create a more original tool to re-acquire its young users? The social has now to manage Stories, pictures, short videos, IGTV, and Reels. By managing all of them at the same moment, Instagram is risk of losing the right focus. The social, which has been created and known for publishing high-quality pictures, must now get over the obstacle and find a way to increase visibility and promote the new activity of Reels.

While Reels have been launched globally, TikTok is still under attack by the U.S. president Donald Trump, who threatened the ban of the Chinese app in the United States, unless the social is acquired by an American society until November 2020. Among the possible buyers, there are the two big tech agencies Microsoft and Oracle, which are still considering the $50 million investment on the TikTok’s American actions. In the case that there will be the ban of TikTok from the U.S., it easy to think that all the young users will go back to the use of Instagram and try on the new Reels function.

We are still waiting to see if there will be a migration of users who are coming from TikTok and are afraid of seeing the app suddenly being blocked. The social has recently experienced a hard blow with the ban of the platform in India. In fact, the country represented the highest community on TikTok without considering China. It is not an accident that Instagram has taken the opportunity to launch the Reels, by trying to fill the space that its competitor has created.

E-Business Consulting is by your side and can help you redefine your Communication Strategy in a multichannel perspective in order to generate a Social Media Marketing plan and increase the results of your business. Contact us and we will be happy to help you!