The growth of the web in Italy 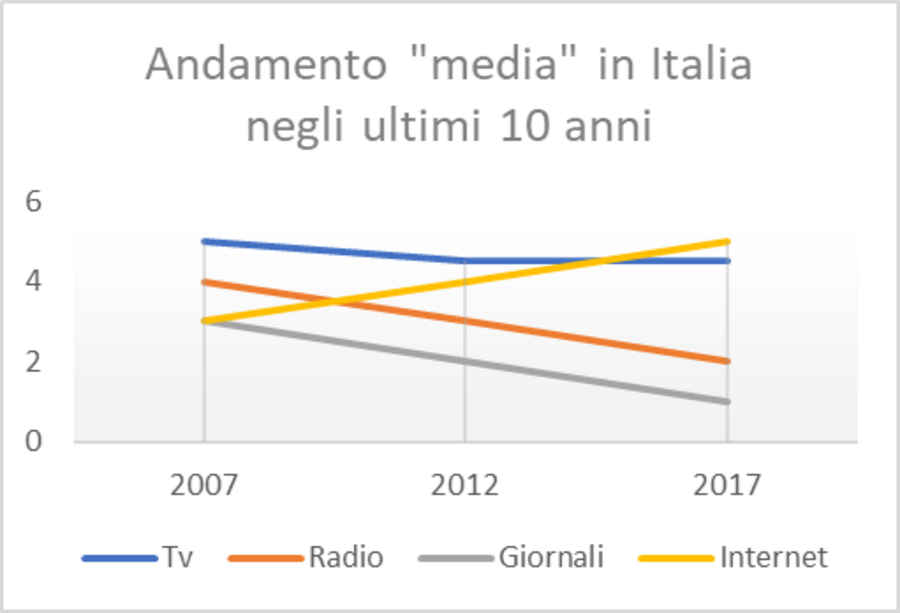 Sociologist M. Castells in 1996 stated: "Radio has taken 30 years to reach sixty million people, television has reached this level of diffusion in fifteen years, the internet has done it in just three years since the birth of the World Wild Web ".

But what is the "state of health" of the various "media" in Italy? And how have things changed over the last 10 years? The "media" trend in Italy over the past 10 years is expressed in the table below, where the "percentage of use" is represented by a scale of values ranging from a minimum of 0 to a maximum of 5. The relationship between TV, Radio, Newspapers and Digital Scope is constantly changing and is increasingly in favour of the latter. People between the ages of 18 and 34 use less and less television to get new information, compared to 2016 there is a drop between 30% and 40% (Business insider).

In Italy, the use of the Internet is steadily growing, in fact, a new record has been recorded: 73.7% is on the web and Internet penetration has increased by 2.8% in the last year. The total growth of web users over the period 2007-17 was + 28.4%: over the last ten years Internet users have gone from less than half to nearly three quarters of Italians (they were 45, 3% only in 2007).

As highlighted in the AgCom report of the Communications Observatory, in July 2017, more than 30 million individuals joined the Internet daily. 26.5 million individuals (+ 18.3% compared to July 2016) were connected by mobile devices. Google remains stable first with 95.9% of users browsing the Internet. On average, navigation on Whatsapp and / or Facebook exceeds the 27-hour monthly navigation per user.

But television crises do not mean TV crises, why? The millennials are always glued to a screen, which is often not the one of the TV set. "The collapse of sales is the effect of what we call the television anytime and anywhere", explains Romana Andò, sociologist of communication to the Wisdom and co-ordinator with Alberto Marinelli of the Observatory Socialtv. "The multiplication of access devices and service providers makes it easier to consume today," says the expert, "but not just in traditional home areas and canonical times of vision."

These are important numbers and cannot go unnoticed, but above all they will continue to grow on a regular basis. The Internet is a "medium" based on bidirectional and interactive communication. We are no longer facing a relationship between "single source" and plurality of consumers, as in traditional mass communication: passive, homologous and repetitive.

But what is the biggest implication from the point of view of communicating this change? A fragmentation of the market and audience. Technological development has created a very "busy" communication market, and this "confusion" has generated a progressive segmentation of the user's audience. Several "niches" of readers, viewers and internet users emerged. Information users are segmented according to different media, but also within each media. In the field of the new media this fragmentation can follow age parameters, demographic, or content variables, respect to the old media mostly geographic variables.

The quality of "strategy" has always been the real "added value" for companies. In the future, the web will be a catalyst and receptive tool, capable of developing more and more targeted and, most importantly, "real-time" strategies. How many marketing agencies have squandered "wealth" for bankruptcy campaign launches and did not yield the expected results? The web, analysis of "big data", traceability and the ability to interactively interact with your target is a benefit of a successful success.

E-Business Consulting, a marketing agency active since 2003, specializes in digital communication, helps to better understand the needs of companies in order to digitize them and make them competitive for the future.