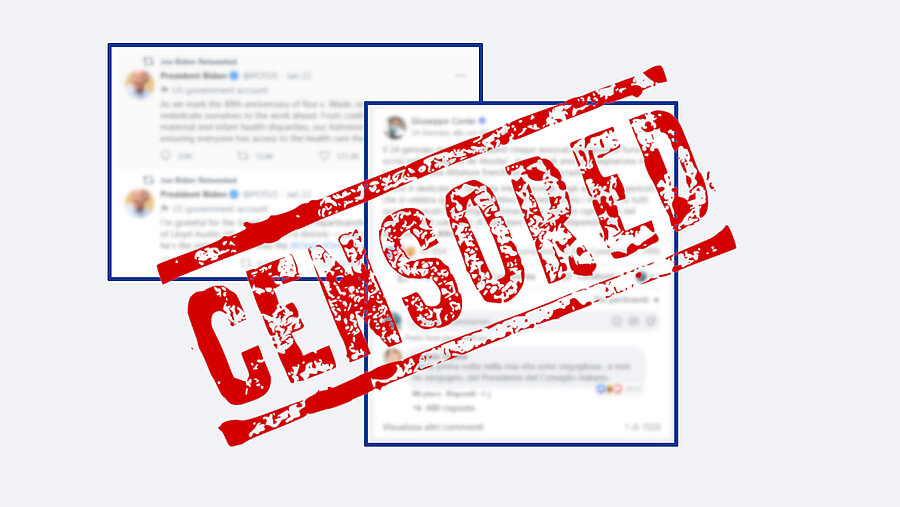 The changing position of social media: the fine line between censorship and content moderation.

It comes as no surprise that social media is the most important tool for mass communication. Every single news is reported, filtered, spread and commented on these platforms. The need to moderate tones and block offensive or violent content often clashes with users’ freedom of speech, who look at Internet as a place to express their opinions as they are, with no filters.

The issue of censorship on Facebook and Google is a complex topic. It is inherent in the system. Even the most "liberal" country has forms of censorship against behaviours that are considered dangerous or criminal because they incite hatred. Each social network therefore has rules on what is lawful to publish and these content policies may also vary from country to country.

This is very dangerous as content can be censored with the sole fault of being in contrast with national political thought.
This is the case of China or Turkey (with its recent "anti-social media law") which exercise strict control over social media, imposing censorship and effectively limiting freedom of speech and the possibility of accessing neutral information independent from governmental ideology.

From a legal point of view, the court cannot impose the non-applicability of censorship. Facebook and Twitter, as private companies, have legal rights that they can exercise. And they put them into practice with the Trump case, a former US president banned on both Twitter and Facebook, whose contents were reported for "exaltation of violence" and "incitement to hatred".

Some welcomed the choice with joy, while others have expressed concern about the attitude of these giants of the web. One thing is certain. This is not the image of the Internet of a few years ago: conceived for the free circulation of information, knowledge and ideas, be it political, economic or ideological. What was once a space open to dialogue, even between divergent thoughts, has now become a replica of the “tribalized” societies in which we live.

What social media algorithms do, is actually closing us in a bubble. Instead of being exposed to diverse, neutral and independent content, we are constantly subjected to what we want to read and, in this way, social networks do nothing but strengthen our political, ideological (and conspiracy) convictions, exacerbating political and social divisions even more.

We conclude this reflection with the following question: to what extent is it appropriate to impose censorship on content published on social media, without leading to a violation of freedom of speech?

To find out all the news and the advantages that can be obtained from Social Media for your business, you can contact E-Business Consulting, a digital marketing agency active since 2003 and integrated into the Social Media world.