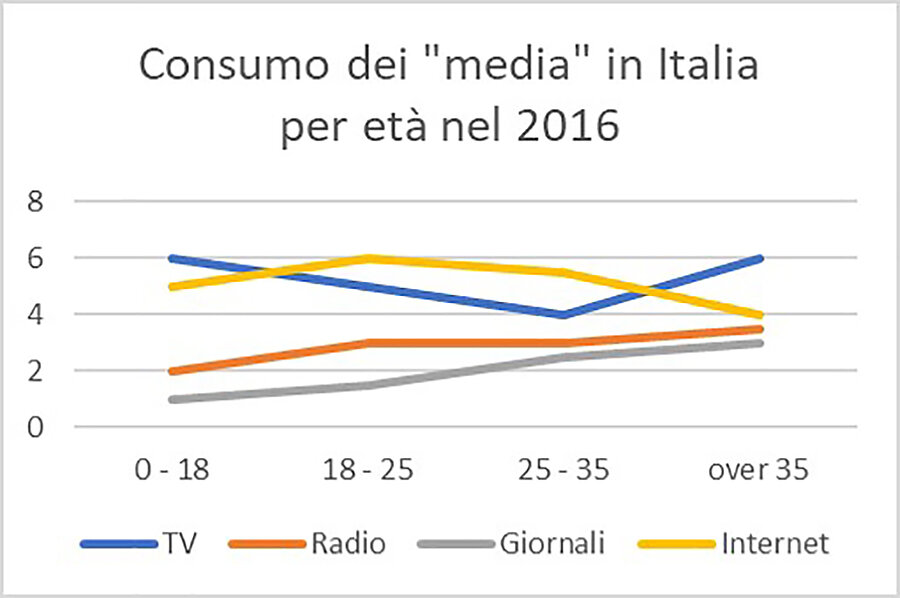 Media Evolution TV, Radio, Newspapers and the Internet: an “ages analysis” of their use in Italy

In 1981, the first Mtv music video was played for the first time in history. That video was "Video Killed the Radio Star" by The Buggles, a famous British new wave band. This episode was a precedent to the radical changes that "media" may suffer.

Over the past 10 years, we have witnessed an epochal turning point in the world of communication and, more specifically, mass communication systems. That is, the so-called transition between "old media" and "new media". But what is the current situation regarding the consumption of "media" by the age of the Italians? We will try to answer this question by using a summary graph that describes the consumption of "media" during the year 2016.

Old and new "media" (TV, radio, newspapers and Internet) and age ranges from "0 to 18" to "over 35" have been considered. Values ranging from 0 to 7 express the "percentage of use". TV and Internet are among the major "media" used.

A very important point is what concerns mobile. In the last year, the number of SIMs with Internet access increased by 9.7% to over 53 million units. Additionally, since September 2012, SIMs that ran data traffic went from 28.6% to 54.5% of the total (61.7% not considering "M2M"). In August 2017, data traffic increased by about 47% compared to the corresponding volumes observed for 2016. In the first nine months of 2017, unit consumption was estimated at 1.63 Giga / month (compared with 1.22 of 2016), with growth above 33%. Almost 80% of SIMs that carry data traffic adopt a specific data plan.

However, despite the advances in new technologies, television still accounts for almost half the total of global advertising profits. This can be explained by considering the variables: in fact, what we call "digital natives" today prefer to take much less of TV, in favour of social networks and the web. As opposed to their "parents" who, due to the lack of familiarity with the "new media", prefer to receive new information from the "old media" (TV, radio and newspapers). Another consequence of Digital's statement is the crisis of printed paper: over the last 10 years a newsstand has disappeared out of four.

We are witnessing a progressive integration between TV, Radio, Newspapers and "New Media", hence web sites and social networks. How many people today report directly to Facebook or a specific social group? The answer is expected. Facebook users in 2010 had exceeded 500 million. Today, September 2017, this figure increased to over 2 billion, an increase of 17% per annum (Zephoria digital marketing 2017). So, more and more people believe that virtual communities and, more generally, the information found on the web are the right ones to be update. We also reiterate the "turning point" that involved mobile phones in Italy, as much as 90.4% of Italians find information directly from their smartphone.

An example: how many people are watching their favourite TV programs at the same time while they are "connected" to their cell phones, commenting on socials and creating "ad hoc" hashtags or "Gifs"?

In fact, it has created a kind of "synergy" between the "old" media and the "new". Today, Television and Radio work better and create more engagement with their users if they can implement a "digital strategy" with their programs. "Easy to wear, easy to buy," media become "easy to wear" as television or radio content follows listeners throughout the day on different devices. They adapt to listening needs (domestic, mobile, digital) as no other means, having a strong consistency between content and new and different consumer experiences.

Such change is a radical turning point for those who promote specific products and brands. In fact, this will always allow for greater and progressive integration between the old and the new media, as the latter will be a useful feedback tool and therefore strategic, which will enable the first to work alternately but far more functional. The "interactivity revolution" has already begun, and will completely change our buying behaviour. Messages will be increasingly segmented for specific targets and thanks to the web, they will be available in the right place and at the right time. Companies that want to promote in the future will have to deal with these changes and activate "web - data - driven strategies" targeted and dedicated to increasingly updated and multichannel consumers.

E-Business Consulting, a web agency specializing in Digital Marketing, helps to better understand the needs of companies in order to digitize them and make them competitive for the future.