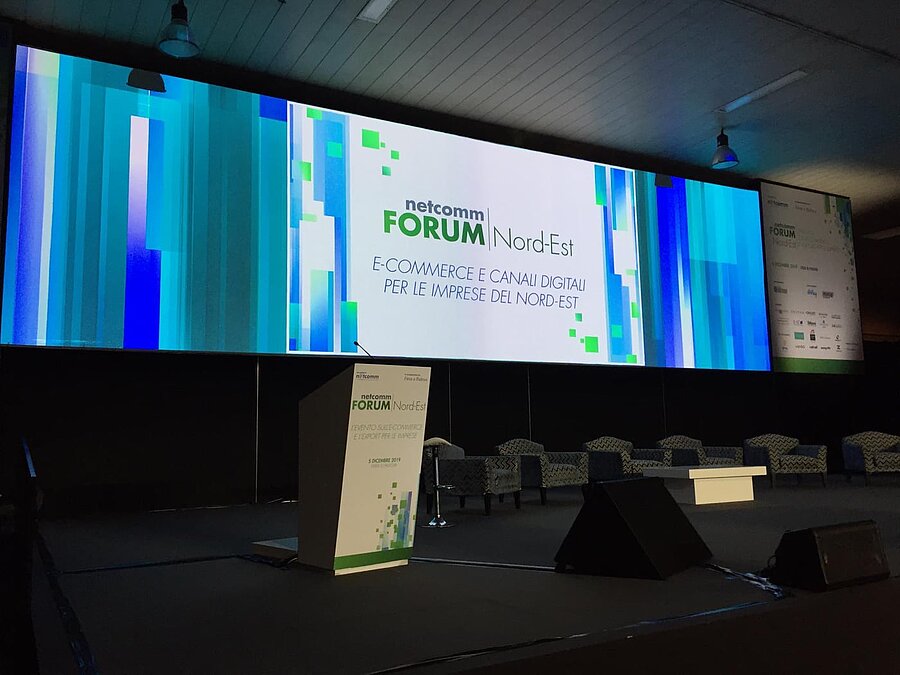 We participated at the first edition of the Netcomm Forum Nord Est: eCommerce and digital channels for the North-Eastern companies.

On the December, 5, 2019 the first edition of Netcomm Forum Nord Est was held at Padova Fiere. The event, entirely dedicated to the North-Eastern italian companies, focused on the theme of eCommerce and digital channels, alternating workshops, speeches, cases and data from Netcomm Academy for key sectors in the North Eastern Italy.

The event was also attended by E-Business Consulting, as exhibitor and sponsor of Netcomm Forum. Many prominent figures attended the pavillion: everyone told their opinion about the opportunities and challenges that the technological and social context pose in these years. In particular, the speeches focused on successful case histories and the best technological and digital strategies for the eCommerce.

We want to tell you, now, some of the most significant data encountered during the day.

Starting with the first speech by Roberto Liscia, president of Netcomm Forum, it has been shown that digital commerce gains more and more importance worldwide, year after year: indeed, approximately 2% of world GDP is linked to eCommerce.

However, if in the United States and China the eCommerces show steady growth, 10% and 11.5% respectively, Italy is not yet aligned with the greatest nations in the world: in 2018 only 44% of Italians buy online and only 10% of Italian companies sell online, while in the United Kingdom and Germany, people who shops online are respectively 86% and 82%, followed by a 20% of british and german companies that chose the eCommerce.

A figure that indicates the low digitalization of our country, but which is naturally destined to grow: as highlighted by Valentina Pontiggia of the Politecnico di Milano, eCommerce is gradually becoming a more mature market in Italy, where there is a maturity rate of 7.3%, which, although much lower than in other countries, has doubled compared to 2015.

Among the workshops that followed one another throughout the day, several illustrated successful case histories, such as Morellato Group, or the new technologies designed to support the best strategies, such as cloud gamification. Finally, Netcomm Academy has dedicated some speeches to entrepreneurs who wish to open an eCommerce and to the most important legal issues.

E-Business Consulting, which operates since 2003 in the world of digital communication, proposes itself as a partner for companies interested in promoting their brand with a omnichannel view, designing and supporting digital strategy, Google shopping, Social Advertising and Email Marketing.