Digital 2019: we are a social country 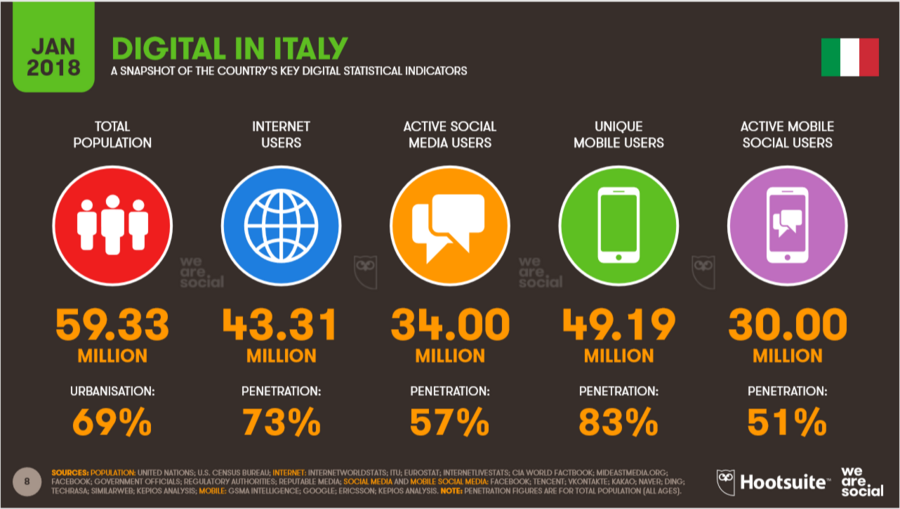 The annual appointment with the Digital 2019 report has arrived again this year: more and more italians are active on the web.

For the past eight years, We Are Social, the socially-led creative agency and Hootsuite, a leading platform in the social media management sector, are launching a glimpse of the digital scenario in 2019.

The statistic investigation concerns the use of the Internet, mobile services, social-media and e-commerce.

The annual report analyzed a social and digital scenario on a global and local level, examining 230 countries. Here, we introduce the most significant data in the global scenario and then the more specific evidences in the Italian case.

In 2018 there was a strong increase in the use of the Web. The number of people who access the Internet is equal to 4.21 billion out of a total world population of 7.593 billion. More than 5 billion of the planet have a smartphone and surf the Web through it. Even the growth of social channels is very strong over 2 billion people have registered since 2012, and are also "matured", with the band around 30 years now the main component and more users above 55 than under 18. 3, 5 billion people are currently active on social channels, almost the 45% of the world's population: an increase of + 13% compared to 2018. 3.25 billion fo them access to social networks with a smartphone or tablet.

In Italy, social media is the primary source for information and entertainment. In line with the increase in social use, Italians are adapting their online lifestyle to appropriate privacy regulations (a procedure that has already taken hold in the rest of the Western world). More than 35 million Italians are active on social platforms, 31 million of them access by mobile. 98% of these are users at least on a monthly basis, and 3 Italians on 4 actively participate. The time spent on a daily basis is just under 2 hours.

Youtube and Facebook continue to dominate the panorama of the most used social platforms. Less popular are Twitter and LinkedIn on which 32% and 29% of the Italian population are active respectively, while verticality such as Snapchat (younger target) and WeChat (very strong in China) are both just over 10%. Within the Facebook ecosystem, the age group 25-34 is the most present, followed by those 35-44 and 45-54, a data which is influenced by the very strong penetration of WhatsApp as a messaging platform in Italy.

As for E-commerce, last year's data confirm that it is gaining ground more and more in our country. In fact, 2 Italians on 3 make purchases online.

E-Business Consulting, a <link en mkt digital-strategy _blank investements for italian>Digital Marketing agency since 2003, it offers the appropriate support to operate in the digital field by designing digital strategies with focus on active experimentation and <link en crm omnichannel _blank>Omnichannel. Contact us now for a free quote