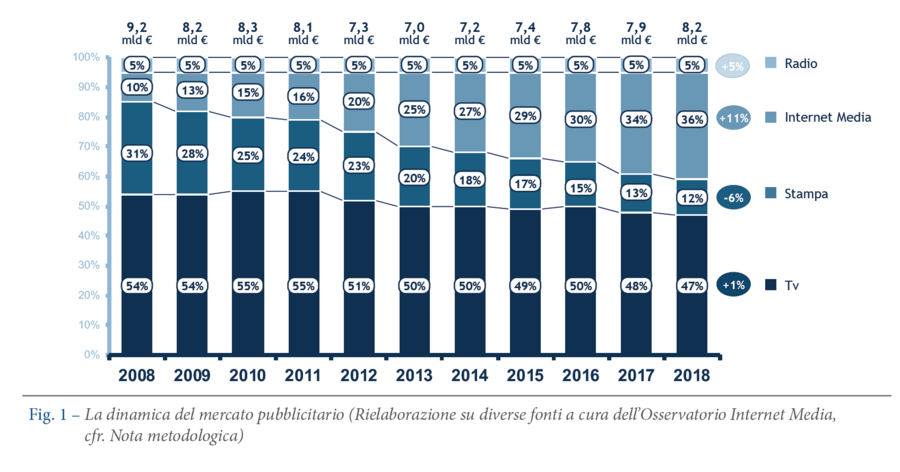 On Tuesday, February 26th, the conference on Research 2018-2019 on the online advertising market was held at the Politecnico di Milano. The absolute protagonists of the research are the data, the primary source of information that is now fundamental for companies to get to know, to deepen and to build in the best possible way the relationship with their consumers. The research carried out by the School of Management of the Politecnico di Milano has detected the changes and traced indications for the future use of data for media and advertising, between collection of the same and the need for sustainable transparency.

8.2 billion is the expenditure invested in advertising in Italy, after 11 years that this number was not reached and with an increase of 4% compared to 2017. The market analyzed by the research focused on the pay revenues and advertising sales of the 4 main media: internet, TV, radio and press. Despite the resistance of TV, which still holds 47% of the total (+ 1% from 2017) and the radio that maintains its share - with a + 5%, Internet advertising grows with a + 11% and takes the 36% of total expenditure: with the same absolute value, the increase was as much as 7 percentage points. The advertising cost of this media alone was 3 billion euros, always considering that it is an average in the hands of very few actors: it is the Over The Top - like <link en adv social-marketing>Facebook, Amazon and Google that hold 75% of the total , even increasing the monopoly by 17% compared to last year.

In the detail of Internet advertising, the <link en adv programmatic-advertising>Programmatic is what is required for growth - up to + 18% on 2017, with a market that reaches 482 million euros and takes 16% of the total, while another important slice is held from the Display adv with 26%. If for the former the most used format is the video that holds 56% of the total with a + 24% on 2017, videos and banners are the most used formats for the second. However, compared to foreign markets, Italy is, despite the steady growth, still behind the European rates, seeing for example that France and Germany are over 30%, US at 30% and the UK is at 25% . New opportunities can be seen in the future, with the advent of addressable TV, digital out-of-home and digital audio, on which new advertising space will be of interest.

Then we analyzed 28 data companies - out of 35 in Italy - to understand from whom companies collect third-party data to improve the knowledge of their users: 57% are "pure data providers", while the remaining 43% are companies which inextricably link the acquisition of data to the launch of a campaign. Out of the total, 89% allows integration between the data offered and those held by the requesting companies. Overall, data provided by data companies are at 93% for both socio-demographic and interest data, 89% for behavioral data, 71% for purchases and geolocation, while at 39% we have data more details like the psychographic ones.

How do Italian companies respond to all this? 82% of the headlines of Italian B2C companies have understood the high importance of data for or business development even if only 1/3 has a team dedicated to data management. 63% operates integration activities to improve profiling with second-party or third-party partners. Finally, compliance with the GDPR is a matter of attention for companies that have immediately adapted to the regulations, a sign of corporate vision, attention to transparency for users and the need for clarity of regulations.

The theme of media transparency has been extensively dealt with by identifying five topics of interest such as viewability, brand safety and fraud prevention, accreditated third party media evaluation and the data transparency & value chain fee and rebate. All of them convert to the ultimate goal of creating the best conditions for both companies that invest in data and for owners of the data themselves or users, for a more aware and more functional market.

Finally, the theme of the blockchain has emerged as a new technology of asset transfer without intermediaries a big news. Transparency is fundamental in it, since every transaction - action that takes place in the chain of information passages - is immutable and interconnected with the others. Linking it to advertising, there are also possible connections with user engagement, where users can be involved in initiatives and paid through bitcoins. However, it remains to be understood for companies if it can really be a technology that significantly or less helps the company.

Often the data collected by these researches, such as those of Nielsen Italy, FCP and Polimi, differ in percentage and values collected. This leads to difficulties in evaluating the market for all the players involved and possible doubts about the strategies to be used for their business.

E-Business Consulting, a web agency specialized in Digital Marketing, in relation to the target, the objectives and the brand is able to guide companies in the construction of the <link en mkt digital-strategy>digital strategy, for the achievement of corporate objectives. Request a free quote now.